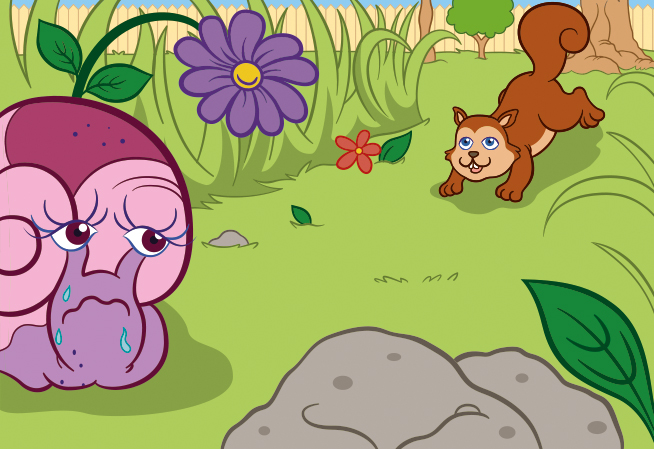 Mr. Squirrel has always been a planner. He knows Winter is still some time away, but he wants to be prepared. Today he is shaking trees and looking for fallen acorns. He also has a keen sense of when the weather is about to change. His squirrely nose tells him rain is on the way. And a prepared squirrel is a dry squirrel.

He woke up early that morning, ready to take on his day. He looked up at the sky and not a cloud could be seen, but he twitched his squirrely nose and could just smell the rain. He would have to hurry. He normally would scamper between three yards, one of them belonged to a little red-haired girl and her family. It was also home to a tabby cat.

Mr. Squirrel did not like the tabby cat. She would always chase him away from the tall oak tree in the yard. Yesterday was no different. He approached the tall oak in hopes of reaching the branch with the most nuts. But before he could even pass the garden that the red-haired girl and her mom tended, Tabitha the tabby cat was on her tail.

They ran around the roses, under the tulips, and around the trunk of the tree. Mr. Squirrel dared not climb the tree. Cats can climb. And even though Tabitha the tabby cat was big, she could climb just as fast as he could. The only thing he could do was to scamper into the neighbor’s yard. He knew he would be safe there. So, he gave up on the tall oak for that day.

Yesterday was over, and today would be different. Just as Mr. Squirrel knew cats could climb, he also knew cats loved to sleep. So, he would get an early start before Tabitha woke up. He was sure he would come home with an armful of acorns to hide for the Winter.

Mr. Squirrel scampered across the first yard and hopped onto the fence. He scurried from the front yard to the back yard, no sign of Tabitha. The only one in sight was Jake the Blackbird. He was flying over the house. But Jake did not scare him. He usually left him alone. He ate worms anyway, not acorns.

He made it across the neighbor’s yard and onto the red-haired girl’s fence. The girl, her mom, and best of all, Tabitha were nowhere to be seen. Mr. Squirrel slowly looked around the yard; he still saw no one. But his eyes did focus on something in the yard.

He scampered toward it. But the closer he got, the more it did not look like an acorn. In fact, it was not even the color of an acorn. An acorn was brown and, well, acorn-y shaped. This was purple, pink, and swirly. It was a shell. “It’s a snail,” thought Mr. Squirrel. “And it must be a girl snail. No way a boy snail would have a pretty shell like that.”

Mr. Squirrel noticed the shell was shaking. The snail must be scared. He slowly made his way to her. But as he got close, the snail spoke.

“Go away, Mr. Squirrel. Please don’t hurt me,” the snail said, she was practically crying.

Mr. Squirrel didn’t want the snail to be afraid; he thought she was a nut. So, Mr. Squirrel scampered away toward the house. As he got near the door, he heard the familiar sound of a cat meowing, and it was close to the screen door.

Mr. Squirrel scampered over the fence and back into the neighbor’s yard. He barely made it. “The trees are much safer over here anyhow,” thought Mr. Squirrel.

As he climbed the neighbor’s tree, he saw Tabitha walking down the steps and into the yard. He scampered up the tree and out of view before she could see him.

Mr. Squirrel finished his day with fewer acorns than what he would have liked. But he was glad that he did not have to be chased by Tabitha. He did wonder about the snail. He wondered about what she was doing that day. Perhaps one day, he would know. Until then, it was time to gather more nuts; his squirrely nose told him that rain was on its way.