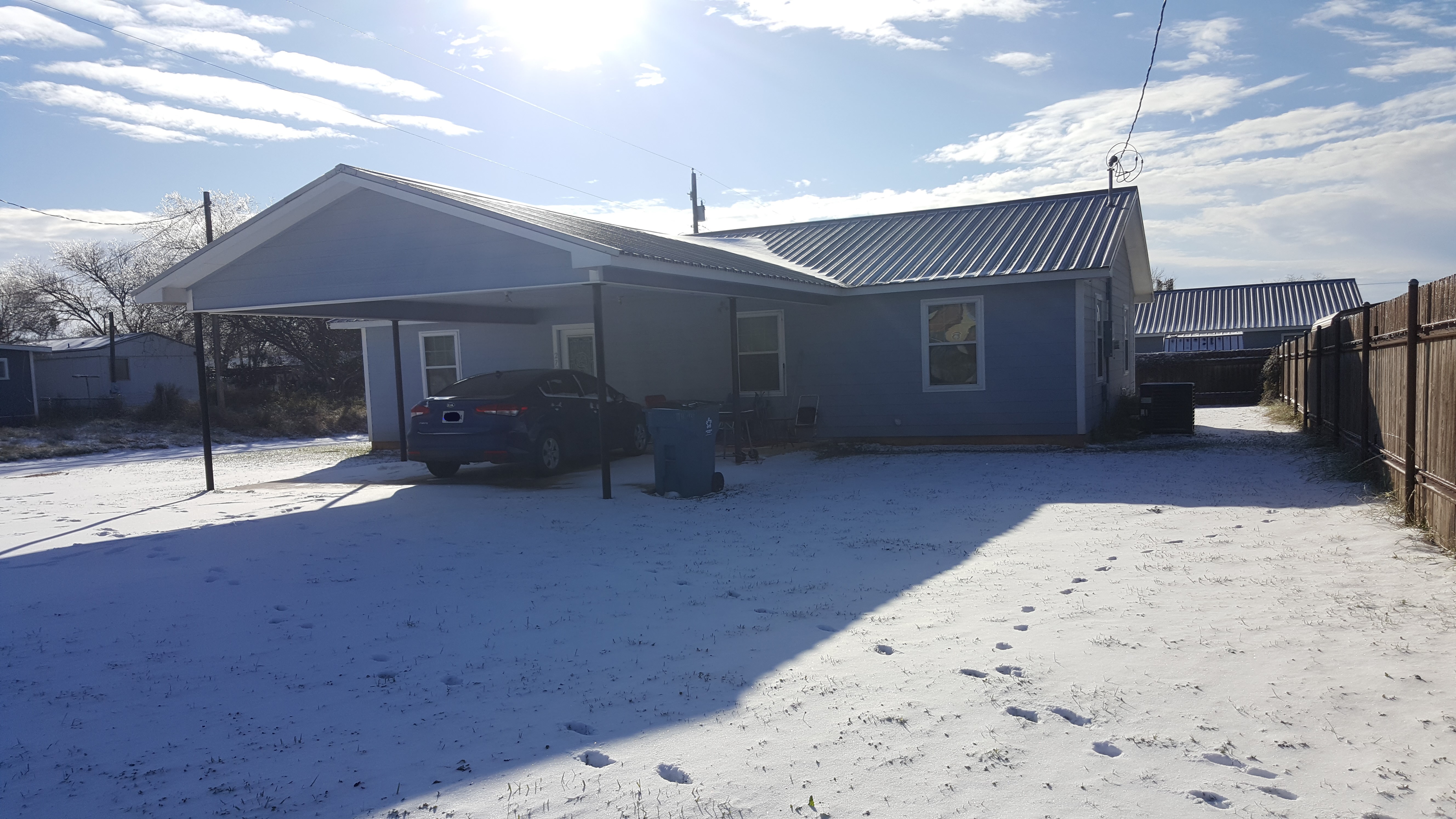 Most of you know that I grew up in Southern California. Sunny skies and warm temps were the norm nearly every day of the year. Occasionally we would get a cold spell in the winter. The measure of how cold it got was not the air temperature but how low the snow level got on the mountains to our North. One was named Mount Baldy. Its proper name is, ironically, Mount San Antonio. There were also two smaller mountains; Mt. Wilson had an array of radio antennas and Mt. Cucamonga. Their dusting would be the telltale sign that the snow would be getting closer to you. Cucamonga hill, we would call it, was the closest and shortest. If you saw the snow upon it, you would be excited and keep an eye out. But many a kid’s dreams were shattered when no snow would land on his doorstep. I think one year in Jr. High, we received a small flurry, but that was it. No accumulation.

Then one year, it happened. 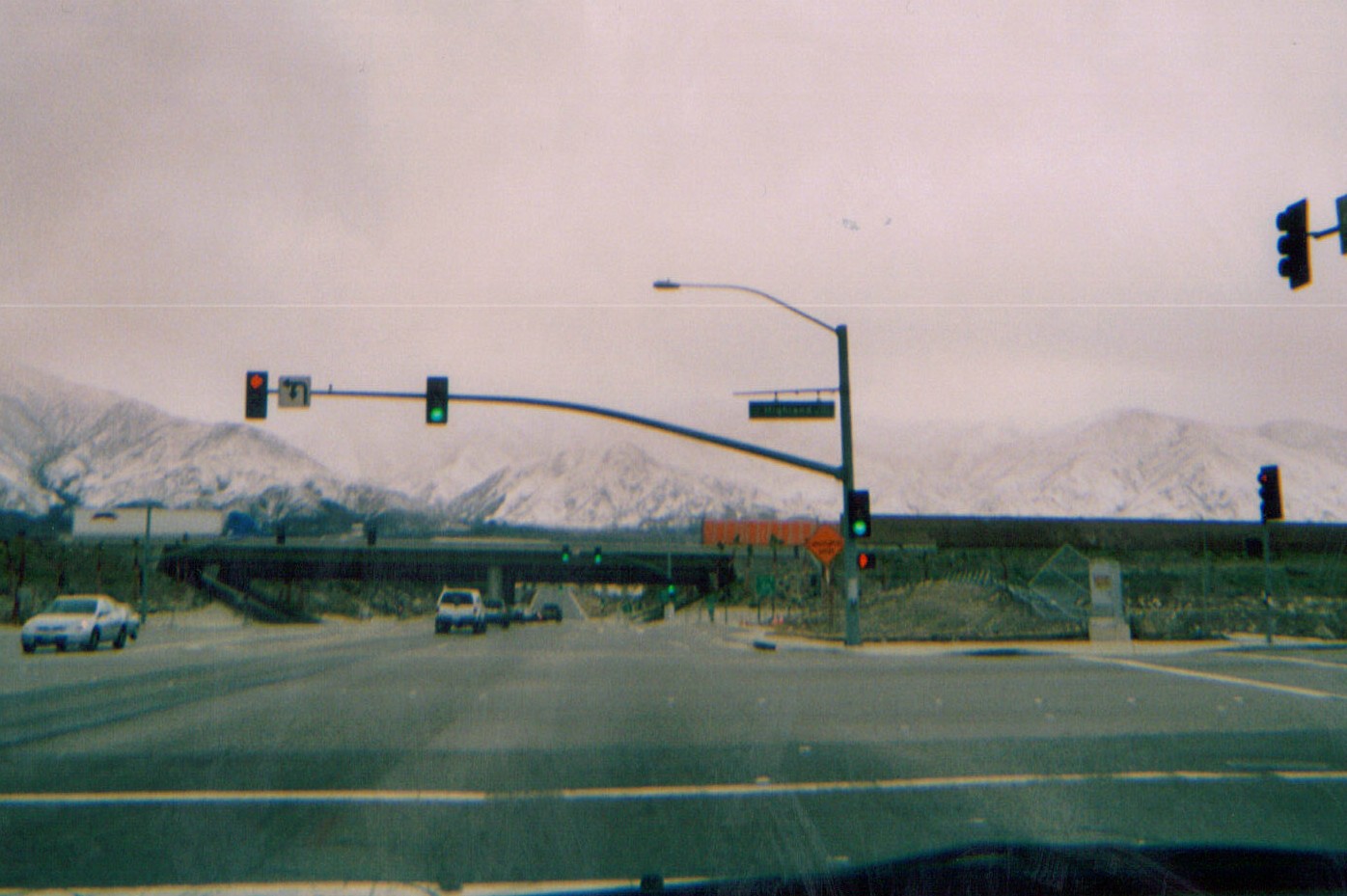 Our First Taste of the White Stuff

One winter, still in California right after Chris was born, we got a taste of snow. That year we were nowhere near those beautiful mountains. We lived in Temecula that year. It was sixty miles south. Amazingly enough, you could still somewhat see them in the distance. Not as majestic as in Upland, there they were practically a stone’s throw away. That winter, we woke up to a dusting of snow. It was enough to draw our name in it, but that was about it. No snowmen were made with that snowfall. I still worked up in the area and was able to capture the above photos. These are the same mountains in the previous photos, just a bit closer because where I worked was a bit closer to them.

Fast forward eighteen years and one relocation. Texas has seen its share of cold weather. We have even seen a couple of light flurries since I have lived here. But nothing compared to what we have experienced the past ninety-six hours.

What We All Expected

I, like you, heard about this cold front coming in and the likelihood of snow. Like you, I envisioned movies and television shows where families gathered outside their homes. In them, children danced around in it, making snowmen and snowballs, and everyone laughed and played. This. Is not. What we got. This experience was nothing like we envisioned.

I watch Alex Garcia from Fox 29. I find him the most reliable weather personality on television. He has a daily report on Facebook and goes beyond the 3-minute spot on late-night news program. He gives a detailed look at the weather forecast and does not speculate about what he ‘thinks’ is coming our way. He gives an honest forecast based on all models out there, then goes through them for viewers. Alex goes live around 5 PM daily on Facebook. He talked about this weather maker over a week ago. But even an expert weather forecaster cannot anticipate how a city’s infrastructure will react to a weather system.

The weather system announced itself by winds and ice from the get-go. Now, I have a pretty good Premium weather app on my phone. I use it as part of being one of Alex Garcia’s Weather Spotters for my area. I used it throughout this event. As the evening progressed, we heard a report of power outages to the North. Then, even when the wind died down, and the sleet turned to snow, there were talks of rolling blackouts from our local Sheriff’s office. Counties around us were beginning to lose power and water.

Through the magic of Social Media, we confirmed this with family and friends. They were being cut off while temperatures were quickly dropping. Before the snow began on us, it was already in the teens, with the wind chill in the negatives. Many of our friends had wood-burning fireplaces, so they were okay to a point. We were okay because our power and water were still running. To make a long story short, we made it through the first night and the next day okay. For us, the power and water were not cut until the following night.

Back tracking a bit before we lost power. that next morning was pretty magical, though. We woke up to sunny skies and a heavy blanket of snow—3 inches of it. Nothing like any of us had ever seen. It was still pretty cold—upper teens. The high scheduled for the day was the mid-twenties. Remember, we are in South Texas. Then, we started hearing reports of people in San Antonio who are already without power and water. It began to make us nervous. Slowly that line began to move south. We are on the second day into the South Texas snowstorm. AEP has the only customers experiencing problems; we are CPL. Maybe we would be unaffected? Guess again.

We enjoyed the morning with clear skies and the beautiful blanket of snow shown above. It was a fabulous never before seen sight for us. We were in awe and enjoyed the snow play, took photos, and Audrey built snowmen. We posted on Facebook and Instagram of the South Texas fun, just like everyone else; unaware of the severity of what was headed our way, ignoring what was happening in other parts of our area. North Texas was already experiencing outages and water shut off.

About 4 AM on Tuesday, we woke up to our ceiling fan shutting off. We always have our fan on, no matter what the weather. It is our lifeline and cannot sleep without it. Then it went dark. Reality set upon us that what happened to our North was now happening to us. We lost power and water within minutes of each other.  We were now amongst the multitude of those without the luxuries of life.

We fell back asleep, knowing we would wake up in the cold, not knowing what to expect. It was surreal. But we trusted God to provide protection, and over the next couple of days, we would see Him work in our lives.

God’s Word talks of the peace that passes all understanding when we trust in Him. And while our home grew cooler, it never got frigid. Fifty-eight degrees was about as cold as it got, while outside, it got into the low teens with a negative windchill. We spent most of the time, as I am sure most families did, in a living area, together. Without power, it made things like video games, television, and excess time on handheld devices impossible. We did charge phones, as I am sure many did through occasional trips to the car, which was also a way to warm up for a bit.

You never really realize how much you rely on electricity and water until you are without them. Just going into a room or using the restroom all become emergencies in one’s mind. And they say that misery loves company. Our company, our community, was all experiencing the same emergency. One thing I have learned in the twenty years I have lived in a small town is how we all stick together. Prime example, our neighbor works in the oilfield. Halfway through this event he brought in a generator and allowed us to use it. We plugged in our refrigerator and were able to keep our devices charged through the line as well.

Another story of provision came a couple of weeks before this began. It was a foreshadowing of what was to come. We buy our meat at Granzin’s. For those of you away from the area, Granzin’s is a meat market. We purchase all of our meat there. We had come into some extra money and chose to stock up our freezer. While it did take some thought and work, we were able to thaw out some meat and used it during our downtime. I almost forgot to mention that we BBQ’ed every meal. Yes, in 20-degree weather, I was outside grilling.

On Thursday morning, about one o’clock, the lights came back on, a day or so before predicted. It was welcomed, as was the sound of the clicking on of the heater. A couple of hours later, it was warm in the house again. A couple more, we had water; however, we are still under a boil order. That is expected to last into next week. Although living in a small town, we don’t drink the water from the tap anyhow. But it would be nice to wash dishes without having to sterilize them after they are clean.

Today, as I wrap up this blog, is Sunday. It is 75 degrees outside. A definite change from a week ago when it was in the low thirties and sleeting. It was an experience for us here in South Texas, and I know my friends to the North like Bonniejean and Tara and Nina are laughing as they read this because your Winters are filled with weeks of this stuff. Well, maybe not the power outages. Mind you, this week would have been extraordinary if it weren’t for the power outages. The snow was beautiful; a definite memory burn for me.

God’s Providence Through It All

Every step of the way, I know God was there. Friends, I realize that some people struggled with this weather, some drastically. And I do not want to discount those who dealt with tragedy during this event. I am praying for you. If there is anything I can do, message me, and I will see how I can assist you. Then there are those who have stories like I do. Please let those be known. You can leave a comment below. Share them out to bring joy to others.

Moreover, help those whose stories aren’t so bright. And if you don’t know your neighbor, I encourage you get to know them. As I have learned through this, they can be a lifeline to you. Above all, trust in God for everything and in everything. He will see you through it—even those of you who have hardship stories this past week; Trust in God. There is nothing he can’t see. Even our unexpected journeys are fully orchestrated plans to Him.